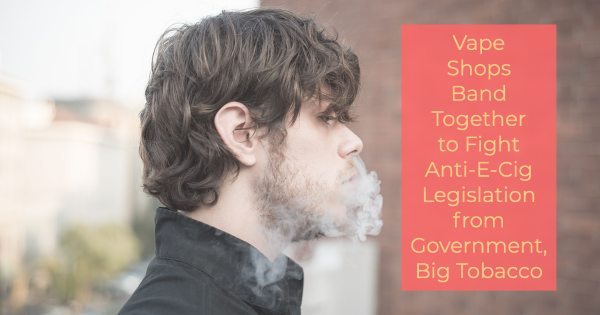 Some advantages of vaping are the variety of appealing flavors, the cheaper cost, and the ability to vape without matches or lighters. Your basic e cig or a vapor pen are also being targeted. The biggest perk of all is that these products help millions of people to quit smoking cigarettes. There lies the real reason that many people are looking to ban it.

The fallacy lies with the notion that vaping is a worse health risk than smoking cigarettes or putting snuff tobacco in your mouth. Are there any pitfalls associated with vaping? Perhaps yes. Are they bad enough to warrant a full ban of vaping and e-cigarettes? No, not really. If someone looks at the true power behind this push, he or she will discover this is not really about e cigs. Instead, they will find big tobacco lobbyists in Washington fighting hard to thwart this trend solely to benefit themselves.

If a customer goes into a vape shop today and asks for American vape mods, he or she will find them now. However, if big tobacco has its way, this will NOT be the case in the future. What can be done about this? Perhaps the vaping and e-cigarette communities can obtain lobbyists of their own to fight the onslaught of upcoming legislation. It is worth a shot!

One vape shop in Brooklyn is trying just this and is fighting back with an event and a crowdfunding campaign. This is in response to government authorities, including those in the state of New York, that are beginning to crack down on the public use and sale of electronic cigarettes through legislative efforts.

Independent shop 7onevape in Bensonhurst is inviting other vaping businesses in the New York City area to help challenge bills and regulations proposed in New York. Thirteen of these regulations, if passed, could significantly impact the vaping industry, and it could even force some shops to close.

One of the harshest laws, proposed by Assemblywoman Linda Rosenthal, would prohibit the sale of any amount of e-liquid — which is the substance used in e-cigarettes and vaporizers to create vapor.

Through their Indiegogo campaign, 7onevape and other local vape shops are hoping to raise $50,000 to hire lobbyists to fight in their interests.

To help raise money for the cause, the shops will hold an event on Saturday, March 28 starting at 4 p.m. The event will include free food and drink, a live DJ, and t-shirts with the group’s slogan, #SAVEVAPINGNY, on them; raffle tickets will be given to customers who spend $12.99 or more or donate $5. Raffle prizes include e-liquid, hardware and accessories.

With an estimated four million e-cig or vaporizer users in the United States, according to the Tobacco Vapor Electronic Cigarette Association, the legislation would also impact the users who depend on this technology for their nicotine consumption.

Perhaps not surprisingly, many of the anti-vaping advocates come from the tobacco industry.

A Reuters special report revealed that big tobacco companies have taken a number of steps to regulate or outright ban e-cigarettes.

Warning labels on e-cigarettes made by tobacco companies often contain lengthy warnings even longer than those on cigarette packages. One warning found on a MarkTen e-cig pack is 116 words long and refers to the “toxic” ingredients found in e-cigarettes.

MarkTen is owned by Altria, the owner and maker of Marlboro cigarettes. The wording on their products could influence cigarette smokers to stick with tobacco, critics say, rather than try an alternative hailed as safe by the vaping community.

Part of the competition is due to the differences in technology. Where tobacco companies have created their own e-cigarette models, most of them are of the disposable variety.

Vape shops, however, offer vaporizers and e-cigs that can be refilled with e-liquid to help users save money. Many of these devices can also be customized to suit the user, which is something companies like Altria just aren’t providing.